KAMARR THE MAGICIAN
From the DAVID LETTERMAN SHOW

Specializing in magic for all occasions and for all ages!

From close-up magic in an intimate setting, to large stage show productions, KAMARR will make your next event memorable. 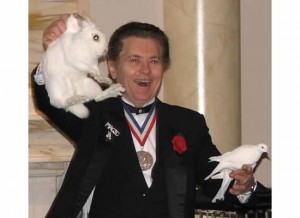 To get results, get the BEST…
The magical artistry of KAMARR will make the difference!

MAGIC FOR ALL OCCASIONS

For details on a custom tailored show perfect for your next event!

ONE NIGHT ONLY EVENT!

Founded in 1902, in Martinka’s famous magic shop in New York City, New York,The Society of American Magicians is the oldest and most prestigious magical society in the world. For one night only, QT presents their 105th Annual event featuring some of the best magicians in the world including Jay Scott Berry, Kamarr, Joe & Bronwyn Devlin, David Oliver & Jeff McBride.

This is an evening of magic you can’t miss, jam packed with illusion from before you even reach your seats! You’ll be wowed with interactive magic acts before the show in the lobby and in the aisles at your seats. Then sit back and be amazed with world class magic from some best magicians in the country!